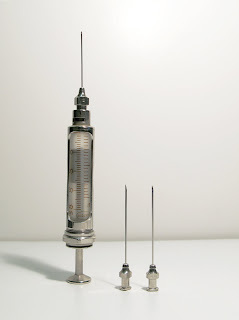 I am old enough to remember the old non-disposable hypodermic needles. From my early childhood until right around eighth or ninth grade every time I had a serious hemorrhage one of my arms (usually the right because it had a huge vein the med students loved) would be strapped down to a board for the IV. The needles were quite large compared to those used today because they had to be strong enough to go through repeated cleanings, and they had absolutely no give to them so your arm, or whatever, had to be kept rigidly straight if the needle was anywhere near the wrist or elbow. When you coupled the thick metal with a large bore for blood you got a very thick needle with a fairly large bevel on the end.

And that was where the fun began.

At University of Michigan Hospitals (they used to be very fussy about that final 's') during the 50s and 60s they did not have phlebotomists, and nurses were not allowed to draw blood or start IVs. Any IV had to be started by the medical staff; and since the joy of scutt work always flows down hill, it was almost always a third year medical student or an intern who was starting your IV. (When I got too old for the pediatric service my care switched over to Simpson Service, the hematology/oncology department. They didn't allow anyone lower than a full Fellow (third year resident) to treat their inpatients. Getting a new Fellow was almost worse than getting a student because they were usually out of practice and it took a few months for them to get back into form.)

Anyway, having the students and interns start the IVs meant you could play little tricks on them that you wouldn't dare do to the nurses. Unlike the doctors, the nurses stuck together. If you did something to one of them they would close ranks and make your life a living hell. It wouldn't be anything you could really complain about (at least not if you wanted to survive that trip to the hospital); but your intramuscular shots would be given with a touch more vigor, pain medication might take an extra ten minutes to arrive, or you might discover your bedpan had come straight from the autoclave when you put your butt down on it.

Doctors, on the other hand, were fair game. Unless their white coat reached their knee or below you could do pretty much whatever you could think of. And interns were especially good targets. They were usually cocky and quite often arrogant because they had MD after their name, and the nurses, and even some first and second year residents, would usually help you bring them down a notch or two.

The usual pattern with IVs was to put them as low, near the wrist, on the arm as possible. That way as the IVs went bad they could work their way up your arm. Our IVs would go bad for a variety of reasons, but the usual causes were either they had infiltrated (the needle had poked/torn through the vein), or a clot had formed in the needle. The various products we were treated with over the years may not have been all that effective, but they still had a higher than usual percentage of the proteins that trigger clots, and would quite often cause a blockage unless the saline used between treatments was kept flowing at a fairly high rate. We would joke among ourselves that the only place a hemophiliac clotted was in the needle. 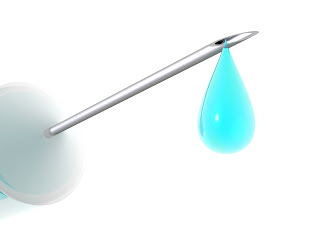 Now because of the size of the needles and the length of the bevel on the end, if the IV was in your forearm you could often control the flow by tensing and relaxing the muscles around it. When you would tense up the muscle the bevel of the needle would be pressed against the side of the vein and the IV would slow down or stop; and conversely, when you relaxed it would flow unimpeded. As he (it was almost always a he) made the final adjustments on the little flow regulator you would tense up a little. He would get it set at a speed he liked and then you would relax. All of a sudden it would be running way too fast, and as soon as he touched the regulator you'd tighten up and stop it completely. If you were good, and didn't start laughing you could keep him there fussing with the tape and the regulator for a half an hour or so.

I imagine that this little bit of fun is a vanished part of the past along with only having three TV stations, and dancing to a stack of 45s. What with peripheral catheter thingys and PICC lines and ports and self-infusion at home driving an intern a little nuts isn't the same as it use to be. Oh well, it was fun while it lasted.
Posted by gb