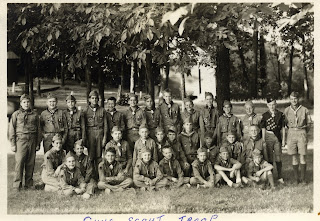 I have already talked about the unfortunate semester I spent at St Elizabeth's when I was in the third grade. Believe me, I only scratched the surface. There was, for example, "Spelling Period." This was not a part of the day devoted to studying spelling, and perhaps having a quiz like any normal teacher might have devised. It was a period, usually about thirty minutes long, during which Sister Rose spelled every word she would normally say; and you, if called on, were expected to do the same. When your sentence came to a punctuation mark like 'comma' or 'period' you said the appropriate word.

I hated Spelling Period. I have learned over the years that I do not assimilate things as quickly when I hear them as I do visually, and I spent most of Spelling Period wondering what the heck was going on. Sister Rose would be up there yammering on, "A•N•D•W•H•A•T•I•S•T•H•E•C•A•P•I•T•O•L•O•F•M•I•C•H•I•G•A•N•comma•G•U•Y•question mark"

When I heard that "comma•G•U•Y•question mark" I knew I was in trouble because I didn't have the slightest clue about what the question was. I got very good at spelling out, "I•D•O•N•O•T•K•N•O•W•period."

But as much grief as Sister Rose gave me, she was not the worst person I ran into that year. And like the good Sister, this man also felt he had God on his side.

Somewhere around the spring of the year, after I was already safely back at Central, Mom came to me and asked me if I would like to be in the Cub Scouts. This was exciting stuff. There was the snappy blue uniform, and if you did a good job you could work your way up to actual, real Boy Scout. I told Mom that I would very much like to be a Cub Scout, and spent the next week or two looking forward to learning all the secrets and skills of Cub Scouting.

Eventually it dawned on me that quite a bit of time had passed, and some of my classmates were going to Den meetings and Pack meetings and I wasn't. I asked Mom about it, and she quietly told me that because I had hemophilia I couldn't be a Cub Scout. I was crushed. I don't remember actually crying, but I know I wanted to. All my life I had been learning what things I shouldn't do or couldn't do because of the hemophilia, but this was the first time I wasn't going to be allowed to figure out a way to still take part in something.

Over the next few weeks, however, I learned by listening to Mom talk to Dad and her friends when she didn't know I could hear them, that the Pack leader's rejection had been a bit, shall we say, stronger and more personal that simply stating a matter of policy.

He had told Mom that I couldn't join the Cub Scouts because I was a cripple and it wouldn't be fair to the other kids. I had no right to hold them back in their activities, and instead of trying to be something I could never be—a real boy—I should be learning to accept my fate, and realize I would never be more than a drain on society. I guess he went on to say that I would most likely die young, or at the very best be an unproductive cripple, and it was unfair to me to let me pretend I was like the other kids. To this day I am surprised that Mom didn't kill him.

It was at about that time I stopped showing my knees to the kids when I had a knee hemorrhage. Along about the time the active bleeding stopped and the blood was starting to be reabsorbed, my knee would turn an amazing swirl of colors. It would still be about the size of a soccer ball, and greens, purples, yellows, reds and sometimes even blues would make it look like a bright finger painting. Classmates were always fascinated by it, but it didn't feel right anymore to let them see it.

Over time I was able to not think about the Pack leader's opinion of my worth. I didn't forget his remarks, but at nine and ten years old I had a lot of other things to do that were a lot more fun than proving him right.

After I turned eleven Mom came to me again and asked if I would be interested in being a Boy Scout. I said sure, but we both knew that they wouldn't let me in. She said she had been talking to a Scout Master, and he didn't see any problem so if I wanted to I could join. Let me tell you, it's hard to tell your mother that something would be nice when you are screaming for joy on the inside.

I will always be indebted to Mr Howard (Skinny) Wilson. He let me be just another boy in the troop. I don't know how he did it, but no matter what happened he made my hemorrhages just another part of learning how to camp out. I also think it helped that the guys in the troop were also pretty decent. They certainly didn't seem to hold any of the opinions of that Pack Leader—at least to my face.

During the Klondike Derby (a winter race where each patrol pulled a large sled around a course with different stations to demonstrate skills) I would be the kid 'rescued' off the frozen lake and treated for a broken leg since I almost always had a knee bleed then. It was just type casting. If I was on crutches or not, I did each chore in rotation with the other guys when camping. The summer we constructed our summer camp ground by lashing everything (tables, fence, gate) together the guys lashed together a litter for me—naturally I had a knee bleed—and carried me through those woods at a breakneck speed that would have given my parents and doctors palpitations. It probably extended the hemorrhage another week, but it was worth it.

The guys of Troop 73, and Mr Wilson especially, will always hold a special spot in my memory because they didn't realize I was a cripple with no future, and just thought I was a Boy Scout.
Posted by gb