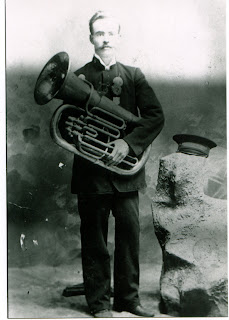 My maternal grandfather was born on the 10th of August, 1874. I know nothing about his ancestors except for the names of his parents, but he was, as it turned out, a bleeder. I don't know if his family used the term 'hemophiliac,' or if they even knew the term, but by the time my mother was born in 1919 he had been diagnosed as having hemophilia.

There is a family story that when he was about five or so he was kicked by a horse or a mule. Like so many family legends it will often get bogged down at this point while various aunts argue the finer points of the animal's species. Horse or mule, the upshot of the episode was that the kick dislocated his hip. The treatment for this kind of injury was, I have been told, fairly basic. A couple of burly men take firm hold of the patient's torso while another pulls on the leg until the joint slips back together. Not an altogether pleasant way to spend an afternoon.

The story goes on to say that by the time said treatment could be administered Granddad's hip had swollen so much relocating his hip was impossible. No one now living knows how long he hemorrhaged, but based on my own experience I would imagine it was two or three months, minimum. I never had, or at least don't remember having, a hip hemorrhage until my teenage/young adult years; but I had plenty of knee bleeds, and they were very often treated only with ice and bed rest. Granddad's family might not have had access to ice in Cobden, Il, around 1890, so I would imagine his treatment consisted almost entirely of staying as quiet as possible. If he was really lucky they might have given him some kind of opiate for the pain, but I'm not betting on it. Even into the late 1960s the attitude was 'tough it out, it's not that bad.'

If they only knew.

The usual time span for a typical knee hemorrhage was five to six weeks of active bleeding, and then two or three weeks for the blood to be reabsorbed and the swelling to subside. Since I never did the kind of damage to my knees that Granddad's hip suffered I'm guessing he was laid up for a correspondingly longer period.

What happens when a hemorrhage is not treated with the relatively new factors (if something was invented after I graduated from high school it is relatively new) is the bleeding continues until the internal pressures are great enough to make it stop. If the flesh around the hemorrhage can still expand, it keeps bleeding. If it's a soft tissue bleed in the arm or leg the hemorrhage can build up enough pressure to cut off the blood supply to the lower part of the limb and cause very bad things to happen. (I think it's called compartmentalization or compartment syndrome.) When Granddad was a boy death would be the most likely very bad thing to happen.

Anyway, by the time Granddad's hip stopped bleeding and the swelling went down it was no longer possible to reset his hip, and that leg was effectively several inches shorter than the other. He had a very pronounced limp for the rest of his life. It was like the gimpy walk Walter Brennen had on "The Real McCoys" except more so. 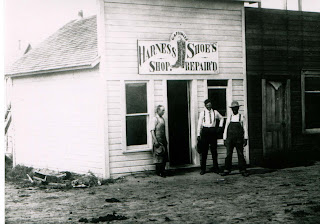 Being alive at the end of the Nineteenth Century and first half of the Twentieth Century, Granddad was not overwhelmed with agencies clamoring to help him. If you were a cripple at that time and didn't have an anomaly weird enough for a side show, either your family supported you or you made your way as best you could. When he had a bleed he still had to go to work. Eventually he learned the cobbler's trade, and was able to set up a shoe and tack shop up, but again, when he couldn't work because of a hemorrhage the kids didn't eat, and there were five of them. This meant that most of the times he had a bleed he just bit down harder on a cut of tobacco and did the work anyway. The cake chewing tobacco he chewed habitually was, to put it mildly, god-awful nasty stuff. He let me try it once when I was about four, and Mom was in the other room, and I gagged for half an hour. That stuff would have distracted me from almost any pain right up to and including open heart surgery.

One of the more fun things that happens during a joint hemorrhage is that the blood hanging out in the joint leaches calcium out of the bones of the joint, along with doing damage to membranes and generally not playing nice. Having nothing more to do with this calcium the blood then deposits it on various bits of the softer tissue like the cartilage. Then, when you start using the joint again, even within its new limited range of motion, the crusty bits the calcium has formed with the cartilage break off and float around in the joint. Before my knees were replaced in 1992 they felt like two badly filled sand bags, and sometimes sounded like badly filled sand bags.

Sometimes a bigger piece will get lodged in the working part of the joint and just shut it down completely. It's the biological equivalent of throwing a wrench (spanner for those east of the Atlantic) into the gear works. The joint is locked up until you can work that piece out of where it is, which usually means grinding it and bits of bone and stuff against each other until it all works loose.  Once again, this is not a happy thought producing activity. The upshot of all of this is that it all hurts. All the time. A lot. This isn't a new to the job, unsure of itself pain. It knows what it is doing, and does it well.

Mom and her oldest brother both say that when he would have a bleed he would still walk to his shop and put in a full day's work. I can't imagine how that felt, or how much extra damage to his joints it caused. By the time I was crawling around his living room floor he had developed a reputation for being a cantankerous, irascible, old man. His ability to suffer fools was not a strong point. One time when Mom was wondering what had made him so grouchy, I told her I was amazed he was as easy going as he was.

"Easy going! You might think so, but he was worse than an old papa bear."

Not knowing the irascibility levels of elderly bear fathers I skipped over that, and said, "Mom, I have a pretty good clue to how much his legs hurt. I'm surprised he wasn't up on that water tower with a rifle."

She just kind of looked at me. Being young, and therefore all-knowing, I went on, "And if the pain wasn't enough to make him mean, not being allowed to spit would really do it." My grandmother tolerated Granddad's tobacco chewing, but she would not allow him to spit in the house or yard.

He died on the 15th of April, 1961. That was, if I have my history right, the year Factor IX was identified. If he had lived a year or so longer he might have discovered he wasn't a "classic hemophiliac" after all, but had what was then called Christmas Disease. Years ago I saw his death certificate, and listed along with old age as cause of death was abdominal hemorrhages. My private opinion is that the chewing tobacco he constantly chewed, and swallowed, was probably a major contributor to their presence. Mom has a slightly different theory.

Our family finances at the time of his death only allowed for Mother to make the trip back to Oregon for his funeral. A few days after she returned I asked her what had finally killed him. She made a couple of harrumphing type sounds of dismissal and said, "Oh, they talked about 'old age' and this and that, but I think the real reason was he had outlived all the people he wanted to piss off."
Posted by gb